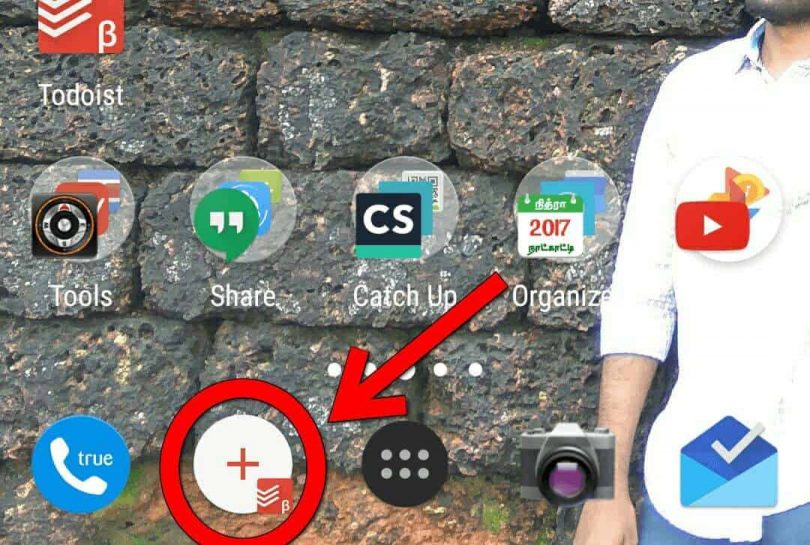 Android’s latest release N (Nougat or 7) has few improved UX features. App Shortcuts is one of them. This post is about how this feature can be used to improve your productivity with favorite productivity apps Todoist and evernote.

Unfortunately, my current smartphone is not upgraded to Android N. I use ‘Nova Launcher Prime’ to experience Android N’s UI. There is a free version of Nova Launcher available at play store.

Shortcuts aren’t new to android, but how it is presented in the latest version of Android is new and cool too. A long press on any compatible app icon will present you with available shortcuts of the same app. In the example case of Google Maps, it will present you two shortcuts namely ‘work’ and ‘home’. The ‘four-dots’ in the shortcuts which makes them draggable. These shortcuts can be dragged to home screen like a app icon.

ToDoist is my favorite Task management app which harnesses this app shortcut feature of Android N. I have added the ‘Add task’ shortcut in homescreen. Refer below screenshots.

The dragging of the shortcut is optional. Sometimes I use the shortcuts like ‘Search’ after long-pressing the ‘ToDoist’ icon. By this, I can directly jump in the window which I want. Quick!!!.

Evernote, another favorite of mine. Best in note-taking. Evernote app for android too have this app shortcut feature, which comes in handy at the time of taking a quick note. Anyway, I feel quite comfortable with evernote homescreen widgets. But I have to say this shortcut is very useful too sometimes. For example I use evernote’s ‘camera’ shortcut for a quick scan.

I use premium version of Todoist and Evernote with both platforms Android and Windows. App shortcuts is a really helpful feature for quick access to few functions in both of these productivity apps. I have been using few more productive tools, which I planned to share it in my future posts.