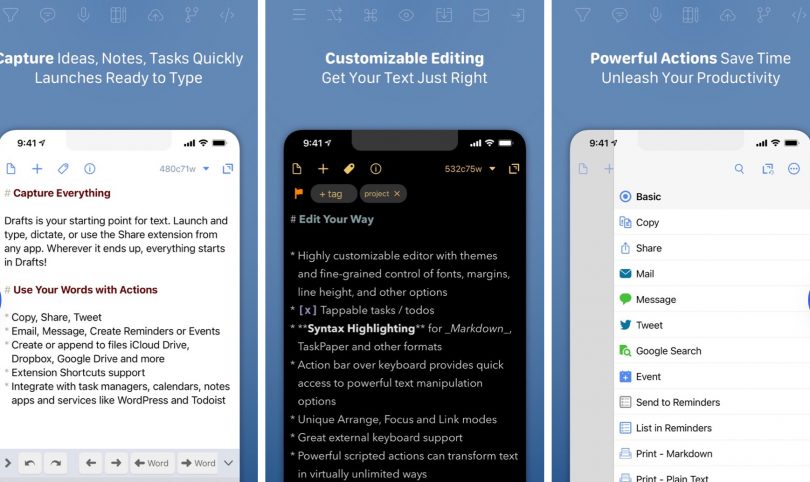 Drafts. As the name suggests, it is a casual drafting app, a text processor of simple look and powerful action features. Actions? What action could a notes app can do other than formatting the paragraph of texts? That was my first thought before trying this app on first hand. I didn’t need a drafting app or any quick capture text app as I was using Evernote as my primary note taker app. I was skeptical about the app’s use and I refused to accept that this app is what I needed from start until I started to use it for a period of week.

Now, I am using it every day, frequently, for every text based content, as a quick capture tool. The USP of Drafts is “where text starts” and in my usage and experience it stands up to it.

Unfortunately, this app is available on iPad, iOS, Mac, WatchOS. As it is only available for Apple ecosystem products, the features it offers are tightly coupled with the system and offers swift experience when using it. Working great with automations and customisations. This is one of those ‘iOS only, iPad only’ apps (Fantastical, GoodNotes, Superhuman, etc) that makes Apple’s productivity environment so powerful and efficient with that usual pinch of elegance.

What ‘Drafts’ does uniquely as text editor?

☝️ It opens in a snap with an empty space (new note) to enter your text. Any form of text. I can capture my thoughts, any form of thought without worrying about where it will go later. It may be a ‘to-do’, ‘event’ to record in calendar, a ‘phone number’, an article idea for my blog, a thought for my museletter (by the way I run a newsletter in the name “Alvistor Museletter”, consider subscribing to it), anything to remember later, an change or a point I want to make in my meeting notes, a quick note down to remember for short duration, a mail draft, a journal entry and you name it. Anything in text. It first goes to ‘Drafts’ app for later processing.

✌️ You can turn your words into the thing you intended to make out of it. It gives plenty of options under its ‘Action Directory’ to take action with the text entires you made (quickly captured). For example, you captured a quick thought in your ‘Drafts’ note. Now you can post it as a tweet without opening Twitter. Or the same may turn in to an email to your circle of friends or you can post them into your blog or just save it in your notes app for later reference. The same content can become a ‘to-do’, so that it can be sent to your fav todo app or reminders app. Even you can record it as an event in your calendar.

In nutshell, you can convert your text into anything. Capture first without worrying where it goes, fussing with thoughts why you capturing in first-place, which app to open, how to type, etc, etc. First dump all your thoughts  before you forget in a fraction, later you can decide what to do with it.

Drafts is not all about quick capture and actions. It gives you a wonderful editing experience within the app. It’s simple yet very powerful. It supports most of text editing functions. I love how it supports multiple markdown syntaxes (including RoamResearch styled formatting, linking and others).

 It has bit of steep learning curve, it takes time for you to get acquitted with its interface. The interface may feel clumsy at first, but trust me, it is in right proportion. It’s only available for Apple platforms.

I am planned to write an article on how I am using Drafts. This article is just an intro about the app which I heavily forced myself share to the world as soon as I found it very useful to me. It now became an inevitable part of my productivity workflow. I strongly recommend this app. The free version of the app is more than enough for an average person.

Post your thoughts and questions in comments, if you have any.

Ask me anything! Shoot your questions to s[at]alvistor.com